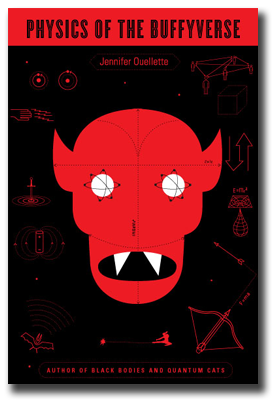 Physics of the Buffyverse
By Jennifer Ouellette
Illustrated by Paul Dlugokencky

In the tradition of Lawrence Krauss's bestselling The Physics of Star Trek, The Physics of the Buffyverse uses the characters, concepts and plot lines of two popular television series -- Buffy the Vampire Slayer and its successful spinoff, Angel -- to illustrate a wide range of fundamental concepts in the physical sciences: everything from sound, electricity, materials science, and thermodynamics, to concepts of time (and time travel), wormholes, black holes, and string theory.

The Buffyverse is undeniably a bizarre place, where magic, vampires, and demons are real, and mystical convergences and other-worldly phenomena are almost everyday occurrences. On the surface, this surreal fictional universe would appear to have very little to do with the world of science. But science is everywhere in the Buffyverse. Many of the monsters' traits are drawn from real-world biology, and chemistry is plainly evident in the concoction of witches' brews and potions -- often performed in the high school chemistry lab, using standard chemical ingredients.

Physics is no exception. Writers for both series have openly drawn on specific concepts in quantum mechanics, relativity, and string theory to develop innovative plots for episodes. A high school girl becomes invisible after months of nobody noticing her -- a clever twist on the quantum notion that observation determines the outcome of a subatomic-scale experiment. There are teleporting demons, temporal folds, time loops, and dimensional portals similar in concept to the hypothetical wormholes proposed by real-world physicists. And one critical scene in an Angel episode takes place at a scientific symposium on string theory.

In short, the Buffyverse offers a unique lens through which to view the precepts of science with fresh eyes. Who says learning about physics can't be fun? For instance:

The Physics of the Buffyverse sheds light on these and many other aspects of Joss Whedon's weirdly wonderful fictional world. Through metaphor, analogy, and specific examples drawn from both series, Jennifer Ouellette takes the reader on an entertaining, yet edifying journey from the most basic concepts of physics to the fringes of its most exotic theories. It's all rendered in clear, lively, accessible prose -- liberally peppered with classic Buffy-speak quotations -- and accompanied by whimsically clever illustrations. You'll never look at physics or the Buffyverse in quite the same way again.

Praise for "Physics of the Buffyverse" Expand

"Ouellette writes in a style that is both charmingly accessible and noncondescending." -- Seattle Times

"If you dig science, vampires and the like, give The Physics of the Buffyverse a try." -- Pop Candy, USA Today

"When the local high school sits atop a gateway to hell and the only thing preventing Earth's destruction is a 5'3", 100-pound blonde, you wouldn't expect science to play a large role. But as Ouellette's tongue-in-cheek study shows, much of Buffy the Vampire Slayer conforms (sort of) to real-world biology, chemistry, and physics." -- Wired

"Her science writing is strong, and her discussions of history and folklore interesting." -- Library Journal

"Like a real world Buffy, Jennifer Ouellette slays science-phobia, explaining such formidable physics topics as relativity, thermodynamics, quantum mechanics and string theory in a clear and fun manner and demonstrating that a sufficiently advanced fantasy world, such as the Buffyverse, is indistinguishable from real science..." -- James Kakalios, author of The Physics of Superheroes

Introduction
Welcome to the Buffyverse

3. Rough Magic
Spellbound by the Laws of Thermodynamics

4. The Physics of the Fight
Mass, Momentum, and the Martial Arts

7. Alternate Reality Bites
A Romp Through the Many Worlds of the Multiverse

8. Any Portal in a Storm
How To Build a Big Swirly Wormhole

9. Shattered Symmetries
Stringing Together a Theory of Everything

10. The Plural of Apocalypse
There's More Than One Way to End a Universe

About the Illustrator Expand

Paul Dlugokencky has created cartoons and illustrations for King Features Syndicate, Newsday, The Economic Times of Long Island, Community Newspapers of Long Island, the American Physical Society, and the American Institute of Physics. He's also done storyboards for films that were never made, and wonders why bios such as this are written in the third person. He lives in Centerport, New York, and is the founder and brewer at Blind as a Bat Brewery.