I’m going to indulge my inner Fangrrl for a moment and wax nostalgic over one of my favorite scenes in the now-canceled TV series Angel (for those not in the know, it was a spin-off of the also tragically canceled Buffy the Vampire Slayer). Every Reformed-Vampire-Seeks-Redemption-By-Saving-the-World series should have a resident physicist, and in the case of Angel, it’s Winifred Burkle, known simply as "Fred." In an episode entitled "Supersymmetry," Fred gets a paper on string compactification published in a scientific journal and is asked to speak at a symposium on string theory at a fictional southern California university. There are two other speakers on the program: real-life physicists Edward Witten and Brian Greene, whom she excitedly describes to her clueless cohorts as the "Sammy Sosa and Nomar Garciaparra" of theoretical physics.

It’s always gratifying to see physics seep into the broader culture-at-large, but I admit, I was a wee bit disappointed that the episode didn’t feature actual cameo appearances by Witten and Greene. ‘S’okay, I rebounded; it’s a hard truth that no self-respecting physicist would deliberately appear on a show about soulful vampires and a pending Apocalypse, however intelligently written. (Sniffs Jen-Luc, "Really, what would the other physicists think?") I’m a grown-up (most of the time). I can handle the occasional puncture in my great big balloon of wishful thinking.

But sometimes the universe throws you a bone. I moseyed on down to Capitol Hill this afternoon to hear Brian Greene give a talk on string theory to Congressional staffers, representatives, and the random policy wonk. Who else should be in the audience? Ed Witten! Talk about a cosmic convergence!

Of course, this is hardly the first time Witten and Greene have been in the same room together, but it was the first time they’d inhabited the same room in our presence. We basked in the self-referential, pop-culture, "Life Imitates Art", sheer fabulousness of the moment, even if we were the only ones who deemed the convergence significant. Jen-Luc Piquant even dug out her tiara to mark the occasion, especially since we were also rubbing elbows with the likes of Neal Lane, Michael Turner, Ray Orbach, and the only two physicists currently serving in Congress, Rush Holt and Vern Ehlers. (This being Washington, Ehlers got more applause than Witten; no disrespect to Ehlers, but the situation would almost certainly have been reversed at a scientific meeting.) Had Buffyverse creator Joss Whedon been on hand as well, our joy would have been complete, but it seems his invitation got lost in the mail. (We console ourselves with the newly acquired knowledge that The Physics of the Buffyverse, my forthcoming book, has hit the radar of the fine folks at Whedonesque.com — another kind of cosmic convergence.)

Any time I attend an organized event on the Hill, the first question that pops into my brain is, "Okay, what are they selling?" Because there is almost always an Ulterior Motive, and therefore a corresponding need to Stay On Message. If one is lucky, lunch is provided, or at least a tasty snack, to help take the edge off the propaganda. Washington is a city devoid of pure, unadulterated altruism, although pockets of genuinely good intentions can be found here and there. If we were being 100% honest, we’d admit that there is no such thing as a purely unselfish motive in human nature, period. (We are reminded in particular of an episode of Friends, in which Phoebe sets out to do something truly unselfish, but her acts of generosity make her feel good about herself, thereby reducing it to a selfish act.)

There was ostensibly no ulterior motive to having Greene speak, other than for general outreach purposes to Congress; in fact, the event had been delayed from earlier in the year due to scheduling conflicts. But the timing couldn’t have been more fortuitous, coming as it did on the heels of the recently released report of the National Academies’ Committee on Elementary Particle Physics in the 21st Century (a.k.a., EPP2010).  So much has been written about this, both in the mainstream media and in the blogosphere, that I won’t even attempt an accurate synopsis. Far more educated minds than mine have already done so, such as Joanne Hewett and Clifford Johnson over at Cosmic Variance. Suffice to say that Greene’s comments were right in line with making the case for funding the next generation of particle accelerators, at a time when that support is desperately needed. Brookhaven and Jefferson Laboratory, for instance, barely dodged a bullet this past year before Congress restored planned funding cuts that would have shuttered one or both facilities — at least temporarily.

Greene is always a delightful speaker, even when covering well-worn ground, and this afternoon was no exception. He deftly outlined the basics of Newtonian gravity, general relativity, quantum mechanics, and string theory, and — more importantly, from my perspective — provided that all-important contextual framework to illuminate how they all link together. 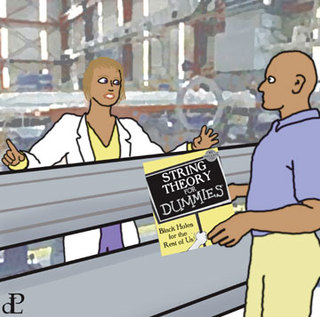 And he wasn’t above teasing his audience: he asked how many of us had heard of the Uncertainty Principle, and when nearly everyone raised their hands, he shot back, "And how many of you can honestly say you understand it?" The number of raised hands decreased by an order of magnitude.

Greene also provided an excellent answer to the inevitable question: why spend billions of taxpayer dollars to construct a gigantic facility to detect exotic things we can’t even observe directly (e.g., the Higgs boson, sparticles, extra dimensions…), that have no immediate bearing on, say, rising gas prices, or how many downloaded episodes of Buffy we can fit on our 60 Gb iPods. And he did so via a story, namely, Einstein’s persistence in developing general relativity over the course of 10 long years.

Newton’s Principia may well be the most significant physics treatise that hardly anyone has read in full, certainly not in the original Latin. (Copernicus’ De Revolutionibus runs a close second.) Newton’s genius lay in mapping out the law of universal gravity so precisely, that we can use his fundamental equations to predict where a ball tossed in the air will land. But when it came to explaining how gravity actually works, the underlying mechanism, Newton copped out, declaring that he would leave this question to the consideration of the reader. Most of his readers didn’t bother giving it much consideration, being content to just assume this was how the world worked, and leave it at that. Einstein was different. Einstein kept asking why, pushing the envelope further, and in the process, he revolutionized physics. Newton believed gravity was a force, one object exerting a pull on another by virtue of their respective masses. Einstein figured out how it worked: an object’s mass warps the fabric of spacetime, and this makes us feel the effects of gravity. ("Some of us feel it more than others," Greene quipped.)

Most importantly, Einstein laid out a testable prediction that light would follow the curvature of spacetime, and this was borne out in 1919 by observations made during an eclipse. String theory is all about finding testable predictions these days, having suffered a bit of a backlash in the physics community. Those heady initial days of infatuation over the potential of string theory to unify the conflicting theories of general relativity and quantum mechanics inevitably gave way to a period of disillusionment as the initial promise began to fade. The big issue: how can you experimentally verify strings that are much too small to observe directly? Technological capability has not kept pace with theory, in that respect. Yet Greene and his fellow string theorists have nonetheless persevered, and judging by his comments this afternoon, Greene remains optimistic about the potential to test certain key aspects of string theory indirectly, via the nearly completed Large Hadron Collider in Switzerland and the proposed next-generation International Linear Collider (which many in the high energy physics community are lobbying to have built in the United States).

Of course, even if we manage to find the Higgs boson and uncover evidence for both sparticles and extra dimensions, it’s almost a given that the answers will give rise to an entirely new crop of questions. And that’s actually a good thing, if you’re a physicist. Like Einstein 100 years ago, Greene hopes the scientific community won’t be content to sit back on its laurels, but will keep asking those fundamental questions to push the envelope of scientific knowledge to the next "final frontier." It’s a journey without a penultimate end; all the fun comes in the discoveries one makes along the way.

Just in case anyone missed the message, free preprint copies of the EPP2010 report were available to those in attendance, but while the fine folks at Cosmic Variance gamely slogged through all 100+ pages, I found a more broadly targeted brochure far more to my liking. It’s called Discovering the Quantum Universe: The Role of Particle Colliders, and it is — almost unbelievably, given the light creative touches sprinkled throughout, and the crystal-clear descriptions — the product of a committee.

We love the whole notion of particle accelerators serving as "Einstein’s telescope," looking so far back in time as to witness the very earliest moments of our universe. We love the dashes of humor, such as this line about the explosion of subatomic particles discovered in the 20th century: "Physicists were running out of Greek letters to name them all." And we love the "Postcards from the Terascale" motif  — "Very warm here. Plan to explore for Higgs tomorrow." — and the amusing marginalia. Jen-Luc was especially tickled by the fact that when physicists "suspect that the underlying theory for something is complex, they call it a ‘moose.’" (If anyone can explain the origin of that particular jargon, we’d be delighted to hear about it.) And it still manages to make a strong, clear case for what the LHC and ILC can each bring to the particle physics table. Our compliments to the committee.