Within my Garden, rides a Bird
Upon a single Wheel —
Whose spokes a dizzy Music make
As 'twere a travelling Mill —

He never stops, but slackens
Above the Ripest Rose —
Partakes without alighting
And praises as he goes

On Sunday, the American Physical Society marked the start of the annual meeting of its Division of Fluid Dynamics in Long Beach, California, kicking off three fun-filled days of science relating to all things fluidic and dynamical — including propulsion, aerodynamics, hydrodynamics, turbulence and bifurcations. It also features the annual Gallery of Fluid Motion, showcasing some of the most stunning images and videos relating to fluid phenomena in a given year. Alas, other commitments prevent me from going this year, despite the proximity, but it's one of my favorite physics meetings because of the sheer range of topics in the papers presented — like the Sunday morning presentation on how hummingbirds manage to fly in strong winds, despite their teensy size and hovering tendencies.

This isn't the first time hummingbirds have captured the attention of physicists. Back in 2005, Douglas Warrick of Oregon State University debuted some truly stunning images and analysis of how hummingbirds hover, using not just high speed cameras — which have been used for over 70 years and have their limitations when it comes to hummingbirds — but a technology called digital particle imaging velocimetry more commonly used in engineering. Per this Physorg.com article: "This system atomizes olive oil into microscopic droplets that are so light they move insyantly with the slightest movement of air — and a pulsing laser then illuminates the droplets for incredibly short periods of time that can be captured by cameras, and illustrate exactly the swirling movement of air left by a hummingbird's wings." 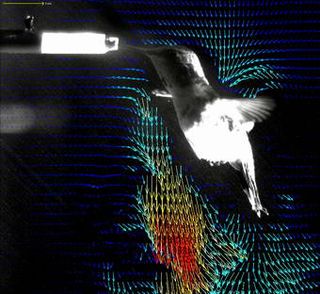 Warrick found that, while many researchers had assumed that hummingbirds used the same flight mechanisms as insects, in fact, the creatures are more of a hybrid between insect and bird when it comes to flight. Consider the wings of a flying insect: these tend to be pretty flat, and lift is generated by a series of halfstrokes as the wing moves back and forth in a figure eight pattern. In an insect, this produces equal lift from the upstroke and the downstroke.

Hummingbirds also employ this unique figure-eight pattern when they hover to generate lift, and they can also invert their wings like insects, turning them upside down during the upstroke, which birds generally don't do very muc. But like birds, the hummingbird's wings are structured differently from that of an insect — more akin to a human arm, with a humerus, radius, and ulna, except a bird's "fingers" are fused into something called a manus, to which the feathers are attached. Warrick's analysis showed that because of this difference in structure, with hummingbirds, the lift generated is not divided equally between upstroke and downstroke. Instead, 25% comes from the upstroke and 75% comes from the downstroke.

This is very different from most birds, too: nearly all of their lift is generated on the downstroke. Hummingbirds, like insects, also exploit what's known as "leading edge vortices" of air flow, which showed up beautifully in Warrick's laser images of hummingbirds in flight. "What the hummingbird has done is take the body and most of the limitations of the bird, but tweaked it a little and used some of the aerodynamic tricks of an insect to gain a hovering ability," Warrick explained back in 2005. "They make use of what is, in other birds, an aerodynamically wasted upstroke. Coupled with taking advantage of leading edge vortices — which you can only produce to substantial effect if you're small — and voila! You're hovering for as long as you want."

Last year, a scientist at the University of Buffalo, Matthew Ringuette, described his plan to study the vortices produced by a hummingbird's flapping wings in more detail by building a robotic model of those flapping wings. Instead of air, he placed his model in a water tank, because the vortices were produced at a larger, easier-to-study scale than if he'd done the experiment with a flying robot. He's looking at such factors as wing size, motion and shape to get an idea of the flow dynamics in three dimensions. "When you get down to such small sizes and slow speeds, conventional aerodynamics no longer applies," he told Physorg.com in December 2009. It's nothing like how air flows and deforms over the wings of a jet.

So nearly six years after Warrick et al. announced their results, scientists are still intrigued by the complex flight of these tiny birds, so much so that now, a team of researchers (from several institutions) has built an actual robotic hummingbird wing to study how the birds stabilize their flight during gusty winds.  It's designed to mimic that figure-eight pattern of wing movement in the actual hummingbird, and recreate the vortices  that give the animals the extra lift they need to hover. As team member BJ Balakumar (who works in the Extreme Fluids Lab at Los Alamos) pointed out, those vortices are very unstable, and a strong gust of wind could easily destabilize a hummingbird. How do they cope? By continually readjusting their wing angles. "Their wings create the vortex with a high angle of attack on the downstroke," Balakumar explained. "Then they flip their wings around on the upstroke, so as they shed one vortex, they create another on the other side of the wing, thereby managing to maintain high lift forces." Rock on, you crazy hummingbirds!

As fascinating as these creatures are, this is research with a purpose. Balakumar and his colleagues think they can use the results of their experiments with the robotic wing to develop robust mathematical algorithms that would help stabilize small unmanned robotic probes (called ornithopters because they are modeled on birds) for surveillance and other applications. That's also the focus of the Buffalo team's efforts. These kinds of small, birdlike devices would be better able to navigate remote caves and tunnels, or labrynthine corridors in large buildings, or narrow, winding city streets dense with tall buildings. The usual intelligence-gathering technologies aren't effective in such environments. But you can't have your biomimetic robots destabilizing with every gust of wind — hence the interest in hummingbirds.

Speaking of the aerodynamics of birds, another talk on the first day of the DFD meeting posed the provocative question, "Should airplanes look more like birds?" A couple of engineers — one in South Africa (Joachim Huyssen of Northwest University), another in California (Geoffrey Spedding of University of Southern California) — started exploring this issue independently by building three different model designs: just a flying wing, wings plus a body, and finally wings with a body and a tail. The idea was to analyze all three to gain insight into the best design for getting more lift (which is more efficient for lugging cargo) and less drag (which can significantly improve fuel efficiency).

Given their baseline criteria that the best plane model would be the one with the least drag, the two men found that the best of the three, performance wise, turned out to be just the standalone wings. That's great, but pretty impractical; the whole point of an airplane, after all, is to move cargo, whether that be boxes or human beings. If you just add a body, you get an instant decrease in lift and increase in drag — the exact opposite of what one should aspire to achieve.

It all comes down to getting the right design for the tail: get that right and you get the lift and drag back on a par with the "wings only" design. "We may be wasting large amounts of fossil fuel by flying in fundamentally sub-optimal aircraft designs," Spedding says of the significance of his and Huyssen's findings. "At the very least, we can show that there exists an alternative design that is aerodynamically superior." Cost constraints will no doubt be a factor in adopting some of the designs for comemrcial aircraft, but his point is sound: we should always be striving for superior fuel efficiency.

Finally, know what else involves sophisticated aerodynamics? A jump rope. You betcha. How many times when you were jumping rope as a kid did you stop and wonder, "Hey — what important aerodynamical and engineering principles might be at work in this seemingly frivolous game?" At least Jen-Luc Piquant was wondering that. I was far more concerned with reciting the following classic rhyme while performing all the requisite moves without catching the rope:

Fortunately for Jen-Luc, Jeff Aristoff and Howard Stone of Princeton had the fortitude to ask those all-important questions, and they built their own robotic jump rope device — robotic models seem to be all the rage these days — capable of controlling all the key parameters relavant to studying the physics of jumping rope: rotation rate, rope density, diameter, length, and so forth. High-speed cameras recorded the motion, and they compared the data to their theoretical predictions — because that's how the scientific method works, after all.

One of their conclusions pertains to the "drag effect," and how much effort one must expend to turn the rope. In general, the rope bends in a such a way as to reduce total drag via deflection or twisting — an effect that is most critical in the center of the rope where the prime jumping is taking place. But if the rope isn't heavy enough, that twisting means the rope won't clear the jumper's body — and we all know what happens then: an end to Happy Fun Time. And again, there's a reason beyond perfecting a successful skipping strategy for studying this sort of thing: "Fluid dynamic effects on long flexible filaments (rope or fibers) occur in both engineered structures and many natural systems, so insights from the jump rope will hopefully inform other common situations," Aristoff said. By the way, I heard hints that Aristoff might have livened up its afternoon talk with an actual demonstration; I hope so. Even if he failed to give a high kick.

1 thought on “fly away home”