Among this week’s physics highlights: dark energy and string theory might not mix, excess gamma rays due to pulsars and not dark matter, and speculation about what would happen if the Earth turned into blueberries. Just because.

Dark Energy May Be Incompatible With String Theory. A controversial new paper argues that universes with dark energy profiles like ours do not exist in the “landscape” of universes allowed by string theory.

Another Dark Matter Search Comes Up Empty. An excess of gamma-ray emission from our galactic center doesn’t seem to be the signature of dark matter, but rather a byproduct of thousands of newly-identified spinning neutron stars. Related: Gamma ray evidence for dark matter outshone by a flock of pulsars.

What if the Earth instantly turned into an equivalent volume of blueberries? One scientist wrote an amazing and overly detailed explanation. “A roaring ocean of boiling jam, with the geysers of released air and steam likely ejecting at least a few berries into orbit.”

Qubits can sync if they have more than two possible values: “even if it can’t be used for error correction… it is yet another tool that we can use to control quantum states.”  Related: Manipulating Light May Hold the Key to Quantum Computing.  Also: Quantum Computers Today Aren’t Very Useful. That Could Change. Meet Rigetti Computing, the startup trying to make a computer that can (finally) live up to the hype.

Neutron stars are probably not hiding dark matter at their cores.

Star-Swallowing Black Holes Reveal Secrets in Exotic Light Shows. Black holes occasionally reveal themselves when passing stars get ripped apart by their gravity. These tidal disruption events have created a new way for astronomers to map the hidden cosmos.

A Black Hole in a Bathtub, More or Less. “One can find dense, dark understanding in a bathtub, if one is a physicist.”

Strange metals are even weirder than scientists thought: Cuprate ups its resistivity with increases in temperature or magnetic field strength. 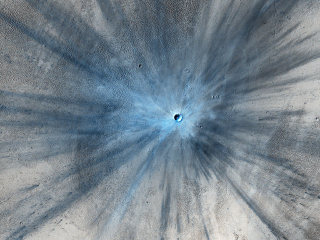 Playing in a sandbox, astronomers solve a longstanding mystery about crater rays. “Tapan Sabuwala of the Okinawa Institute of Science and Technology Graduate University was scouring the internet for videos by other researchers, hoping to find someone who was producing crater rays in sandbox experiments. Although none of the experts were achieving such a pattern, Sabuwala chanced across a video where high school students were producing the elegant rays.” [Image: NASA/JPL-Caltech/Univ. of Arizona]

What Caused Carnegie Hall to Lose Its Famous Acoustics in 1986? “It wasn’t until nine years later, as workers were replacing the warped stage floor, that a break in the case finally came.”

Spacetime Emergence, Panpsychism, and the Nature of Consciousness. How does experience, which is so intimately tied to our perception of time and space, arise from timeless, non-spatial ingredients?

Finding Murder Victims in Unmarked Graves Can Be Made Easier with Lasers, Study Shows.

A dual-phase DUNE: The Deep Underground Neutrino Experiment is advancing technology commonly used in dark matter experiments—and scaling it up to record-breaking sizes.

What Termites Teach Us About Robot Cooperation. We imagine that the future of autonomous swarms is machinelike perfection, but moments of unpredictable, Three Stooges–like chaos are also likely to emerge.

How Can We Promote Cooperation in an Uncooperative Society? A branch of mathematics known as evolutionary graph theory has some promising answers.

Dunbar’s number doesn’t represent the average number of social connections. “the number of contacts in people’s networks doesn’t follow a normal distribution. Instead, network sizes may follow a power law.”

How Much Power Does It Take to Fly in a Real-Life Jet Suit? To hover a human over the ground, you need some serious engineering—and the momentum principle.

The Meg’s True Size According to Math. “If one were to try and weigh and measure it as if it were about to fight another giant beast in the sea ring (say, Godzilla), what weight class would we have to put that bad boy in?”

Soapy Physics: Viscous Jets And The Kaye Effect. Pouring a bit of liquid soap from one container into another produces crazy patterns that almost look like magic.

“When you enjoy the sound of a babbling stream on a hike, what you’re actually hearing is bubbling. Air bubbles caught in the water resonate at a frequency that depends on their size.”

Numbers in the News: Sand, Sand Everywhere. “If you take all the sand used commercially every year, all 50 billion tons of it, you would have enough sand to cover the state of California. To which Californians might ask: ‘Well, how deep are we talking?'”  Related: The Ultra-Pure, Super-Secret Sand That Makes Your Phone Possible. The processor that makes your laptop or cell phone work was fabricated using quartz from this obscure Appalachian backwater.

Leidenfrost drops – liquids levitating on a film of their own vapor caused by the extremely hot surface below – can turn themselves into star shapes.

Algorithms Help Power Grids Survive GPS Spoofs. The approach can keep a grid in service even if one-third of its nodes are compromised.

Europa Is Whistling. Finding The Cause May Solve A Magnetic Mystery. “Jupiter’s moons “hum” — and researchers are trying to figure out why.”

That Mysterious ‘Alien’ Radio Signal: Here’s What You Need to Know. “It probably wasn’t from aliens, as far as we can tell—nor are these “fast radio bursts” something you should be worried about.”

What’s in all that space between the stars? Space gloop! The vast emptiness of space isn’t really so empty: It’s filled with space goop made of greasy carbon molecules.

Explore New Worlds With JPL’s Open Source Rover. NASA’s Jet Propulsion Lab has adapted a Mars rover design into something that you can build in your garage.

Astroethics and Cosmocentrism: As astronomers forge ahead in their search for alien life, the ethical questions a discovery would raise are becoming more urgent.

What Wish Would You Ask a Math Genie to Grant? “If a genie offered to give you a thorough understanding of one theorem, what theorem would you choose?”

What a mathematical formula can teach us about coincidence. “We live our lives thinking about the patterns of events that happen around us. We ask ourselves whether they are simply random, or if there is some reason for them that is uniquely true and deep. As a mathematician, I often turn to numbers and theorems to gain insight into questions like these. As it happens, I learned something about the search for meaning among patterns in life from one of the deepest theorems in mathematical logic. That theorem, simply put, shows that there is no way to know, even in principle, if an explanation for a pattern is the deepest or most interesting explanation there is. Just as in life, the search for meaning in mathematics knows no bounds.”

“Today’s ‘understanding-centered’ approach to learning math, combined with efforts to make the subject more “fun” by avoiding drill and practice, shortchanges children…” writes Barbara Oakley in the NYT. And this may impact girls the most.

“One must know what one wants to be. In the latter endeavors irresolution produces false steps, and in the life of the mind confused ideas.” — Mathematician Émilie du Châtelet,whom Voltaire considered the Newton of France,on gender and the nature of genius.

Can Science Save Politics? Or Will Politics Ruin Science? “Science has never truly been separate from the political system that funds it and uses the tools it creates. But scientists have not traditionally pushed so hard to make that relationship explicit, or to be the ones in charge of it.”

When It Comes to Sexual Harassment, Academia Is Fundamentally Broken: Why everyone should read the National Academies’ sexual harassment report.

Gallery: Beautiful Works of Art Are Generated by Austere Mathematical Rules. Images and sculptures inspired by mathematical principles show off the intense beauty of the discipline [subscription required].