Among this week’s physics highlights: thousands of new “topological” materials discovered, the physics of breaking spaghetti strands neatly in two, and the latest work on how black holes might be giant stringy fuzzballs.

But first, some big personal news: I am thrilled to announce that I am now a senior reporter at Ars Technica, covering the “where science meets culture” beat. And here’s my first article: MIT scientists crack the case of breaking spaghetti in two, or How not to shatter spaghetti into half a dozen little pieces (it’s all in the twist).  Bonus: I wrote a short post about the new trailer for Iron Fist, because part of my awesome new job is being able to cover my favorite films and TV series. New Iron Fist Season 2 trailer renews our hope for the Netflix series. Danny Rand will battle his former rival, the Steel Serpent, starting in September.

Thousands of exotic “topological” materials discovered through sweeping search. “In late July several teams posted preprints detailing their scans of tens of thousands of materials and their predicted topological classifications, which are based on algorithms that use a material’s chemistry and symmetry to calculate their properties.”

Are Gravitational Waves the Key to Nailing Down the Universe’s Expansion Rate?

Einstein’s equivalence principle updated with a dash of quantum.

Avalanches are violent. In the worst cases, tens of thousands of tons of snow accelerate from zero to 80 MPH in seconds. Using groundwork laid by the animators of Disney’s Frozen, researchers have created a simulation that may save lives.

Surprising Accelerator Finding Could Change the Way We Think About Neutron Stars.

HC Physicists Embrace Brute-force Approach to Particle Hunt. The world’s most powerful particle collider has yet to turn up new physics—now some physicists are turning to a different strategy. 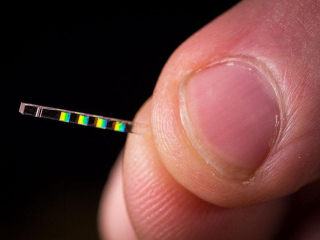 A Particle Accelerator Between Your Fingertips. Imagine an accelerator that you could hold in your hand, or even just in-between your fingertips. Scientists at Stanford University are trying to do just this. [Image: SLAC National Accelerator Laboratory]

Forget the Higgs – the flaxion could be the most exciting particle in physics. If we can find it. [subscription required]

Is Gravity Quantum? The ongoing search for the graviton—the proposed fundamental particle carrying gravitational force—is a crucial step in physicists’ long journey toward a theory of everything.

“Random” noise pours cold water on room-temperature superconductivity.  Related: An unfolding controversy in condensed-matter physics provides an opportunity to illustrate the elements that distinguish the real process of science, even when it fails, from the false claims of pseudoscience.

Evolutionary Math and Just-So Stories. Is the grandmother hypothesis a real evolutionary phenomenon or another just-so story based on idealized mathematical modeling?

High-energy protons emitted after hooking up with neutrons.

Surf’s up, dude! The Physics of Catching a Gnarly 80-Foot-Tall Wave.

A cyclist in the middle of a peloton can experience 5-10% of the drag of a solo rider.

Google just made it much harder to build a serious quantum computer with an algorithm that beefs up regular PCs. [subscription required]

Record-Breaking Signal May Help Solve the Mystery of Fast Radio Bursts. The CHIME telescope could soon deliver thousands of additional detections of the mysterious cosmic outbursts.

Billions of Color Changing Particles Create Amorphous Waves in a New Art Film by Maxim Zhestkov. It “explores the laws of nature through the interactions of billions of spherical particles.”

Simple acts like the coalescence of two droplets sitting on a surface can be beautiful and complex.

This bomb simulating US Supercomputer broke a world record. A trillion-particle simulation? No sweat for the Trinity supercomputer at Los Alamos National Lab.

Ancient Nuclear Waste Is Teaching Us About Radioactive Storage Today.

Three Science Experiments You Can Do With Your Phone. Your phone can measure acceleration, magnetic field, sound, location, and maybe more—which turns it into a portable data collector for science projects.

Eight Movies That Really Got Science Wrong. “The cartographer gets lost immediately, and as soon as the biologist sees an alien animal he wants to cuddle with it.”

The Greatest Mistake In The History Of Physics and how Francois Arago Fixed It. 200 years ago, Simeon Poisson demonstrated that Fresnel’s wave theory of light was absurd. Case closed? Hardly.

ICARUS neutrino detector installed at Fermilab. With this move, ICARUS now sits in the path of Fermilab’s neutrino beam, a milestone that brings the detector one step closer to taking data.

Stephen Granade on Twitter: “Opportunity on Mars has been asleep since the big dust storm a while back, so the mission team has taken to playing wake-up songs every Martian day for the rover and shut up, you’re the one crying.”

Long-standing astronomical mystery solved: Albireo is NOT a binary star.

Hacking The Electric Grid Is Damned Hard. “Bringing down the grid is a lot harder than just flicking a switch, but the danger is real — and it may never go away.”

A Science of Exceptions: On Michel Serres’s The Birth of Physics.

Review of Particle Physics Celebrates its 60th Anniversary Edition. The ultimate reference on all things particle physics is available online, with a slimmed-down booklet version soon to follow.

Cosmologist Stephen Webb Addresses the Age Old Question About There Being Life on Other Planets.

“Geometry is perhaps the most obviously aesthetic branch of mathematics, and marvelously suited to visual play – a property that the German animator Henning M Lederer explores to great effect in this short video.”

The Bubble Under the Mathematical Rug: Don’t freak out, but we’re surrounded by normal distributions.

The Mathematics of Folding a Fitted (Contour) Sheet.

What are wormholes, anyway? “Are wormholes real or are they just magic disguised as physics and maths?”

Injecting Ink Into Water and Filming With a High Speed Camera: “The colors, textures and patterns created by this simple interaction are stunning.”