Black holes might be stringy fuzzballs, concrete blocks are great for storing energy, and using cosmic rays to image Brunelleschi’s famous dome are among this week’s physics highlights.

They Do It With Muons: Italy’s famous dome is cracking, and cosmic rays could help save it. Filippo Brunelleschi left no detailed blueprints for how he built his famous structure.

High Hopes: We can learn the secrets of smooth traffic flow by watching fire ants. Study finds that 30 percent of ants in a colony do 70 percent of the work. That’s a good thing. 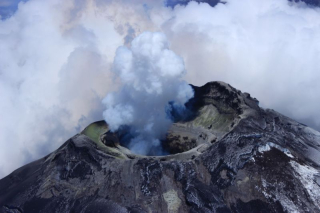 Black Hole Firewalls Could Be Too Tepid to Burn. String theorists elide a paradox about black holes by extinguishing the walls of fire feared to surround them. See also my 2015 Quanta article on black holes as fuzzballs.

Did Scientists Actually Spot Evidence Of Another Universe? “One of the fundamental characteristics of the CMB is that, although it has patterns, the variations are entirely statistically random. In fact, Pelrose’s former collaborator, Stephen Hawking, spotted his own initials in the CMB while others have found a deer, a parrot, and numerous other recognizable shapes in the noise.”

A Superconductor Scandal? Scientists Question a Nobel Prize–Worthy Claim. Scientists claim to have achieved superconductivity at room temperature, but other physicists say the data looks doctored.

The war over supercooled water: How a hidden coding error fueled a seven-year dispute between two of condensed matter’s top theorists.

Tiny magnets will escort ions out of rare material from a shipwreck: Nanoparticles will remove damaging chemicals from the 16th-century warship Mary Rose.

Meet the Nuclear Weapons Nerds: “It is not surprising that many have become avid collectors and students of nuclear history. Some are just more obsessive than others.”

Scientists Will Soon Drop Antimatter to See How It Behaves in Gravity.

Stacking concrete blocks is a surprisingly efficient way to store energy. “Because concrete is a lot denser than water, lifting a block of concrete requires—and can, therefore, store—a lot more energy than an equal-sized tank of water.”   Related: How Much Energy Can You Store in a Stack of Cement Blocks? It’s not a trick question: You really can make a battery out of concrete by storing gravitational potential energy.

Nearly every lab has a magnetic stirrer for mixing fluids, but this ubiquitous tool still holds some surprises, like its ability to unexpectedly levitate.

The Last Jedi: Geophysicist explains why that Resistance fighter was smart to lick salt on Crait.

Bringing the Stars Home: How your coffee cup is like a supernova explosion.

This Is How America Nearly Nuked A Canal Through Central America: the story of the failed Pan-Atomic Canal, and the insane larger project that it belonged to.

Infinite Loops of Crashing Waves Made from Single Photographs [VIDEO]. “Photographer Ray Collins captures the magic that happens at the intersection of water and light.”

A Futuristic Mechanical World Comes to Life in This Gorgeous Short Film, Fabricated.