Among this week’s physics highlights: An infrared cloaking device thanks to salt-infused graphene, the string theory universe landscape may not exist, and closing the door on “hidden variable” theories.

My latest for Quanta: A Math Theory for Why We Hallucinate: Psychedelic drugs can trigger characteristic hallucinations, which have long been thought to hold clues about the brain’s circuitry. Now a possible explanation is crystallizing.

Salt-infused graphene creates an infrared cloaking device: “researchers have crafted a material that adapts its properties so that its infrared appearance is either hotter or colder than the object it encloses. In other words, hot objects appear cold, or cold objects can appear hot—it’s infrared camouflage.”

String Theory May Create Far Fewer Universes Than Thought. Some physicists claim the popular landscape of universes in string theory may not exist

After researchers found a loophole in a famous experiment designed to prove that quantum objects don’t have intrinsic properties, three experimental groups quickly sewed the loophole shut. The episode closes the door on many “hidden variable” theories.

How to turn a kitchen microwave into a plasma-etching device.

Physicists’ simple spanks economists’ complex in economic growth forecasts. “It just so happens that the economy falls into the category of a complex system, which various physicists spend a lot of time playing with.”  Related: Five questions for MIT’s Cesar Hidalgo: A short-read Q&A with the author of Why Information Grows.

A new review in Nature chronicles the many ways machine learning is popping up in particle physics research. 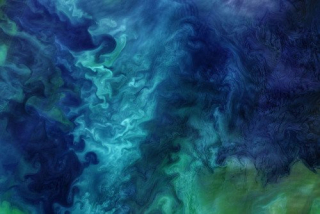 “Every summer, as the ice melts, the waters of the Chukchi Sea off the Alaskan coast come alive with swirling phytoplankton blooms. In satellite images like this one, they can look like abstract paintings formed from swirling colors.” (Image: NASA; via NASA Earth Observatory)

For Some Reason, These Quantum Mechanics Toys Didn’t Catch On. Designed in the 1960s, these clever blocks were intended to help students grasp arcane quantum abstractions.

Major Quantum Computing Advance Made Obsolete by Teenager. 18-year-old Ewin Tang has proven that classical computers can solve the “recommendation problem” nearly as fast as quantum computers. The result eliminates one of the best examples of quantum speedup.

Richard Milner on a new US particle accelerator: 99% of your body mass comes not from subatomic particles but from the energy binding them together. A proposed accelerator, the EIC, aims to figure out how that happens.

Have you ever wondered why some foams disappear so quickly while whipped egg whites stick around? Physics has the answer.

Here’s What Earth’s Shadow Actually Looks Like. “The trick is to keep the curvature of the shadow matching up as precisely as possible. Which images to choose is up to artistic license and I chose a spiral effect, not only to show the umbra but to also show the progression of the eclipse as time went on.”

The Fields Medals have been awarded to four researchers who work on number theory, geometry and network analysis, along with one Nevanlinna Prize winner, and Quanta has in-depth features on each recipient. First, A Number Theorist Who Bridges Math and Time. Akshay Venkatesh, a former prodigy who struggled with the genius stereotype, has won a Fields Medal for his “profound contributions to an exceptionally broad range of subjects in mathematics.”

Second, A Master of Numbers and Shapes Who Is Rewriting Arithmetic. The 30-year-old math sensation Peter Scholze is now one of the youngest Fields medalists for “the revolution that he launched in arithmetic geometry.”

Fourth, An Innovator Who Brings Order to an Infinitude of Equations. The mathematician Caucher Birkar was born on a subsistence farm and raised in the middle of the brutal war between Iran and Iraq. After fleeing to England, he has gone on to impose order on a wild landscape of mathematical equations.  Related:  Mathematician Caucher Birkar receives the Field Medal, the world’s top math award, which is then stolen just minutes later.

Finally, A Traveler Who Finds Stability in the Natural World. The mathematician Alessio Figalli is rarely in one place for very long. But his work has established the stability of everything from crystals to weather fronts by using concepts derived from Napoleonic fortifications.

A Conversation with the Only Scientist in Congress: Representative Bill Foster weighs in on the most important science issues facing the country.

Science is an Infinite-Sum Game: It’s a win-win endeavor with unlimited horizons for expanding our island of knowledge into the ocean of ignorance.

Why “Old Physics” Still Matters: Chad Orzel on the usefulness of a historical approach to teaching physics.

10 physics facts you should have learned in school but probably didn’t.

Researchers say they can train computers to identify sexual orientation and criminality by scanning a person’s face. But to many critics, this is just plain old bad science hiding beneath the veneer of mathematics.

David Doody went from dreaming his rocket ship in his backyard was going to Saturn to actually directing Cassini toward the ringed planet. The mission is over. What happens now?

In Science, And In Life, ‘Once A Failure’ Does Not Mean ‘Always A Failure’: The story of John Couch Adams, “the man who failed to discover Neptune,” and his cosmic redemption.