Taming turbulence by flattening fluids, two ways a crystal shrinks, and the physics of steeping tea are among this week’s physics highlights.

Mathematicians Tame Turbulence in Flattened Fluids: By squeezing fluids into flat sheets, researchers can get a handle on the strange ways that turbulence feeds energy into a system instead of eating it away.

Searching for the Quantumness of Gravity (Q&A): Brian Swingle believes that quantum entanglement could explain the nature of spacetime—an idea that could lead to a quantum theory of gravity.  See also my 2015 article on tensor networks for Quanta.

“Traveling” Brain Waves May Be Critical for Cognition. Physical motion of neural signals may play a more important role in brain function than previously thought.

It’s the Heat and the Humidity—Two Ways a Crystal Shrinks. The mechanisms by which a material contracts on heating and on absorbing water turn out to be intimately connected.

These “Microlasers” Turn Infrared into Laser Light and May Play a Role in Next-Gen Medical Tech.

The Physics of a Spinning Spacecraft in The Expanse: For the most part, this show gets *a lot* right.

What We Learned About Marvel’s Quantum Realm From Ant-Man and The Wasp.

The Quest to Make Super Cold Quantum Blobs in Space: Physicists launched a custom-made freezer and then let it plummet back to Earth—for science!

Real-Life Schrödinger’s Cats Probe the Boundary of the Quantum World. Recent experiments have put relatively large objects into quantum states, illuminating the processes by which the ordinary world emerges out of the quantum one.  See also two 2016 Gizmodo posts I wrote about similar work on quantum “cat-states.”  and 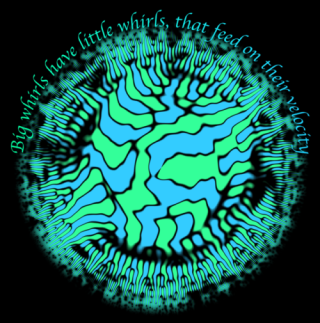 “Turn your faucet on high or pour milk into your coffee, and the flow just looks like a completely unpredictable mess. But there are important patterns to be found…. Using data from a numerical simulation, the authors transformed velocity information into these mandala-like patterns.” [Image: M. Bassenne et al.]

Let’s Use Physics to Model a Curving Soccer Ball. You could practice out on the pitch, or you could use a numerical calculation. (Or you could do both–theory and experiment!)

An expert in bird flight biomechanics “performed drop tests, which involve dropping a baby bird and a golf ball onto a soft pillow to see which is better at resisting gravity.”

We Just Found The Missing Matter In The Universe, And Still Need Dark Matter. Many hoped we could do without dark matter. On cosmic scales, the evidence has finally spoken.

The Dark Energy Deniers: According to current cosmology, most of the universe consists of a space-expanding dark energy. But not everyone is convinced it’s real.

Giving Proton Therapy Energies a Boost. A proposed upgrade for proton accelerators used for cancer treatment could enable doctors to use the machines to image tumors as well as to treat them.

How Roboticists Are Copying Nature to Make Fantastical Machines. Nature knows what it’s doing, and roboticists are more than happy to steal evolution’s ideas to make a plethora of curious and clever machines.

Mathematics Shows How to Ensure Evolution: New results emerging from graph theory prove that the way a population is organized can guarantee the eventual triumph of natural selection — or permanently thwart it.

This Device Could Make You Invisible to Thermal Imaging: materials scientist Coskun Kocabas and his team have created a thin, flexible device that can disguise the temperatures of objects captured by thermal imaging in real time.  Related: How to Become Invisible: Here are two completely different medieval methods you can use to render yourself invisible. “After you’ve sprinkled some holy water and called four demons this way, they will arrive eager to serve you.  Then, you just ask for an invisibility cloak.”

Hawai’i’s Kilauea Eruption Did Not Rain Gemstones From The Sky. Green crystals found near the fissure eruptions at Hawai’i’s Kilauea volcano are likely not associated with the ongoing eruption, but Olivine crystals weathered out from older lava rocks.

It’s Time You Learned About Quantum Computing: A researcher explains quantum computing in terms anyone can understand—even an 8-year-old.

Pi and the meandering paths of rivers. “On the second day of spring in 1996, the Cambridge University earth scientist Hans-Henrik Stølum published a paper announcing his astonishing finding that pi is also nudging, always nudging, the bendy paths of the world’s rivers to continue their seemingly chaotic meanderings — in a mathematically predictable pattern. His simulation, using empirical data and fluid dynamics modeling, found that the oscillating paths of rivers — their sinuosity, calculated by dividing the river’s actual meandering length by the length of the direct line drawn from source to sea — average 3.14.”

The Tonality Cube: An Illustrated Explanation of Hexany, A Six Note Mathematically Derived Scale Shown as a 3D Cube.

The Gruesome History of the First Underwater Film. “The filmmaker J.E. Williamson used his own invention of a photosphere, an airtight chamber that was sunk deep under water for the specific task of filming the scenery.”

Plasma, the mysterious (and powerful) fourth phase of matter. “The study of plasmas also enjoys some remarkably elegant mathematical constructions, but unlike its scientific cousins, it’s mostly been driven by its applications to the real world.”

The Young Milky Way Collided With a Dwarf Galaxy. Astronomers have found stars dating from a long-ago collision between the Milky Way and another galaxy. The crash helps to explain why the Milky Way looks the way it does.

The rate at which the Universe has expanding has changed tremendously in 13.8 billion years. So why do we call it the Hubble constant?

What would it be like to stand on the surface of Ryugu? The Japanese Space Agency mission Hayabusa 2 is now orbiting the small asteroid Ryugu.

Chasing Thermonuclear Fire: Feel like the world might be better off if it was suddenly turned into a flaming ball of nuclear fusion? Alex Wellerstein has good news and bad news for you.

Chernobyl Revisited: A Case Study in Ineptitude and Deceit. The Soviets were vastly unprepared, in ways small and large, for what became the worst disaster in the history of nuclear energy.

A Nobel Doesn’t Make You an Expert: Lessons in Science and Spin. “How is the average intelligent person (Socrates’ ‘wise man’) supposed to be able to distinguish between science and pseudoscience without becoming an expert in both?”

Feynman Diagram Rock Carving in Russia: “Within the steppes of Tuva, close to the Valley of Kings, you can find a Feynman diagram carved into the rock.”

A Guide to Translating Science to Audio: “Forty minutes of live radio on quantum physics—we’re not scared of that.”

Constance Adams, who has died at 53, gave up designing skyscrapers to develop structures that would help travelers live with reasonable comfort on the International Space Station, Mars or the moon.

Why Curie’s no Einstein: A subtle gender bias in science. “A new study suggests that using a scientist’s surname may be helping perpetuate a bias against female scientists.”

Celebrate Tau Day with an Extra Slice of Pi. To understand tau, you need to understand pi. Watch how mathematicians from Archimedes on have wrapped their heads around the math of circles.

Can the World’s Largest Lemon Battery Power a Race Car?  Related: Turns out that a potato can be used as a camera, with predictable results.

Watch how timelapse footage revealed the secrets of penguin huddling.  See also my 2013 Scientific American blog post on the physics of huddled penguins and how they’re a lot like traffic.