The APS March meeting took place in Los Angeles this week and Jen-Luc Piquant was thrilled to be able to see all her old pals and hear about tons of exciting new physics on her home turf. Among this week’s physics highlights: a twisted graphene sandwich can be superconducting, poking a black hole to test Einstein’s equations, and skyrmions seem to mimic ball lightning.

Surprise Graphene Discovery Could Unlock Secrets of Superconductivity.  A sandwich of two graphene layers can conduct electrons without resistance if they are twisted at a ‘magic angle’. Physicists have been “stumbling around in the dark for 30 years” trying to understand cuprates, says Laughlin. “Many of us think that a light just switched on.”

To Test Einstein’s Equations, Poke a Black Hole. Two teams of researchers have made significant progress toward proving the black hole stability conjecture, a critical mathematical test of Einstein’s theory of general relativity. “In space-time, as on Earth, it’s hard to find a coordinate system that works everywhere.”

Physicists Find a Way to See the ‘Grin’ of Quantum Gravity. A recently proposed experiment would confirm that gravity is a quantum force.

Does a Quantum Equation Govern Some of the Universe’s Large Structures? A new paper uses the Schrödinger equation to describe debris disks around stars and black holes—and provides an object lesson about what “quantum” really means. Related: Fundamental Equation of Quantum Physics Also Describes Rings and Disks in Space.

Love Is All You Need: Clauset’s fruitless search for scale-free networks. A rebuttal from Albert-Laszlo Barabasi to the recent claim that scale free networks are rare.

What scientists found trapped in a diamond: a type of ice not known on Earth.

How a string of giant atoms might bring quantum computers to physics labs–sooner than you think. Related: Google moves toward quantum supremacy (in which quantum computers become as powerful as normal computers) with 72-qubit computer. IBM and Intel recently debuted similarly sized chips. Counterpoint: Google Unveils Largest Quantum Computer Yet, but So What?

The Infinity of the Small: Have we reached the frontier of the minuscule? Alan Lightman writes: “It’s all material, even the magical fog, like the bioluminescence I first saw as a child. It’s all atoms and molecules.” 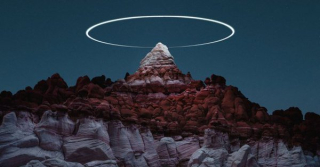 How Fast Can Gravitational Wave Detection Get? With machine learning and other algorithmic approaches, researchers are increasing the speed at which they detect the undulations of spacetime.

Researchers are using powerful X-rays to look inside cannonballs found on the famous Tudor ship, the Mary Rose.

Bacteria Is Why The Space Tesla Could Really Mess Up A Planet (If It Ever Hits A Planet).

Demonstrations of Bernoulli’s Principle You Can Try At Home. “To understand Bernoulli’s principle, it helps to think of air as a bunch of tiny balls.”

Vortex rings may look relatively calm, but they are concentrated regions of intensely spinning flow.

Only Dark Matter (And Not Modified Gravity) Can Explain The Universe.

Juno Peers Deep into Jupiter’s Abyss to Reveal Weird Winds. Breakthrough measurements of Jupiter’s hidden interior could revolutionize our understanding of giant planets. Jupiter’s atmosphere weighs about as much as three Earths, and is so deep you could stack more than two Earths atop one another and still not reach its full extent.

A star is about to plunge head first toward a monster black hole. Astronomers are ready to watch.

Why Plate Tectonics Remain Key To The Evolution Of Extraterrestrial Technology: “these days tectonically-driven atmospheric recycling has become a pretty sexy topic.”

That Time When 4,000 Physicists Gave a Vegas Casino its Worst Week Ever. “In the (probably apocryphal) words of one casino waitress: ‘They each brought one shirt and a ten-dollar bill, and changed neither.'”

Sand’s color is derived from its mineralogy, or the physical structure of the crystals that populate the sand.

Abiotic Awareness, An Eerie Fractal Journey Inside of an Icy Research Facility in the Arctic:

The Future of ‘Fab Lab’ Fabrication. First Moore, now Lass: As machinery gets cheaper and more digitized, could the number of fab labs, or such tools, really double every year and a half?

Clearing the Radioactive Rubble Heap That Was Fukushima Daiichi, 7 Years On. The water is tainted, the wreckage is dangerous, and disposing of it will be a prolonged, complex and costly process.

Salvador Dalí and the Hypercube: The surrealist artist had a lifetime fascination with science and mathematics, which greatly influenced his art.

The Hyperbole of Elliptic Geometry (and 14 Other Math Cartoons). So many math jokes that they may distort your local spacetime.

From Einstein to GPS to the Back Seat: Will the US continue to lead the world in science? The discovers of cosmic acceleration advocate for the importance of WFIRST to explore this mystery and the importance of basic research.

Leading Skeptic Group Suspends Ties To Physicist Lawrence Krauss After Sexual Harassment Scandal. The Center for Inquiry has distanced itself from star speaker Lawrence Krauss “pending further information,” 11 days after BuzzFeed News revealed a long history of accusations against him. Related: On Tuesday, Arizona State University said that professor Lawrence Krauss is banned from campus while the school investigates the allegations. The announcement followed Krauss’s resignation from the elite “Doomsday Clock” group.  Also: ASU cancelled its Origins Project 10-year anniversary celebration, and Krauss was dropped from “celebrity atheist’ double bill tour of Australia and New Zealand with Richard Dawkins.  Postscript: As Allegations of Sexual Harassment in the Sciences Continue, New Rules Aim to Address It.

The Role of the Observer in Cosmology: a conversation with Sean Carroll, Yasunori Nomura, and Raphael Bousso.

What Happens to Whipped Cream and Meringue When They Are Placed Into a Vacuum Chamber.

This week we celebrated International Women’s Day. Some examples: A celebrated physicist with a passion for music: the New York Times profiled CERN director Fabiola Gianotti. Related: Maria Cunitz brought the stars down to Earth. The multilingual German astronomer distilled Kepler’s data and published an astronomy book that was accessible to the masses. Also: My Mother, the Scientist: Joan Feynman’s son recounts what it’s like to grow up with a mother, who is a distinguished physicist and the sister of a renowned scientist. And then there was this terrific video from the Reactions crew at the American Chemical Society: