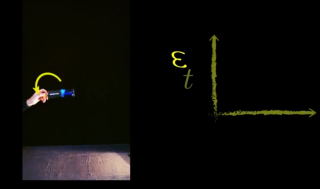 Just Like Painting Flames on a Camaro: New Mars rover gets high-tech paint job for harsh conditions on Mars. It took three men several days to prep and paint just the rover’s chassis.

Signs and Wonders: The first trailer for Good Omens will make you long for the end times. A demon (David Tennant) and an angel (Michael Sheen) team up as unlikely allies.

Also: I weighed in with three of my favorite physics books for this compilation in Physics World. The Physicists’ Library: To compile the ultimate science reading list, Tushna Commissariat talks to some of today’s top physicists, writers and broadcasters.

Famous Experiment Dooms Alternative to Quantum Weirdness. Oil droplets guided by “pilot waves” have failed to reproduce the results of the quantum double-slit experiment, crushing a century-old dream that there exists a single, concrete reality.

Raising Spiders in a Physics Lab Reveals There’s More than Strength Behind a Spiderweb’s Sturdiness.

Programmable Material Inspired by Muscle. A specially designed modular material can adopt many force-generating and energy-storing postures, which could be useful for soft robotics.

The Unsolvable Problem. After a years-long intellectual journey, three mathematicians have discovered that a problem of central importance in physics is impossible to solve.

We’ve seen more fast radio bursts, but we still don’t know what they are. A survey shows that the lone repeating instance is a real exception.

Urmila Mahadev’s determination to show that a classical computer can check a quantum computer’s output finally paid off. What kept her going? “I was spending time learning about things that I was interested in, so it couldn’t really be a waste of time.”

This Is Why Nuclear Weapons Will Never Stop Hurricanes Like Michael. Why can’t we just nuke hurricanes like Michael before they arrive? Let us count the ways.

For The Last Time: The LHC Will Not Make An Earth-Swallowing Black Hole. There’s the way physics works, and there’s the way fear works. If you know the first, you won’t have any of the second.

If you imagine the shape of a raindrop, you probably think of a tear drop shape, but the reality of rain is much more complicated.

The 8-dimensional space that must be searched for alien life. A new mathematical model suggests that signs of extraterrestrial intelligence could be common, for all we know—we’ve barely begun investigating the vastness where they might lie.

Clara Is a Story of Exoplanets, Existential Longing–and Real Science. A conversation with the director and a science advisor behind a new film on the search for extraterrestrial life.

Doctor Who‘s Gallifrey Would Be a Nightmarishly Awful Place to Live.

The Mechanics of Putting Dan Stevens Through a Meat Grinder in Apostle.

Why You Don’t Want the Power of Teleportation: “teleportation comes with as many problems as Nightcrawler has weird raised-skin tattoos.”

How to Get Better at ‘Back of the Envelope’ Calculations. Estimating answers to everyday physics problems is an art form. Here’s one tip: learn to ignore what you don’t know.

Mathematics as thought. Mathematical ideas are some of the most transformative and beautiful in history. So why do they get so little attention?

Experimenting with a Tesla coil. “Is wireless power possible, and did Nikolai Tesla make a tower that could transmit a useful amount of electrical power wirelessly?”