Astronomers spot another neutron star merger, the first BEC created in space, and how Leonardo da Vinci’s vision disorder may have influenced his art are among this week’s physics highlights.

Probable Cause: “Fixed mindsets” might be why we don’t understand statistics. Study finds people prefer complicated methods because that’s what they’re used to.

Making a Scene: What watching “Forrest Gump” tells us about how we store memories. People’s brains respond most strongly to transitions between events.

The Dead Will Rise: Fifth-century child’s skeleton shows evidence of “vampire burial”: Dubbed the “Vampire of Lugnano,” the skull had a rock stuffed in its mouth to keep it from rising from grave. 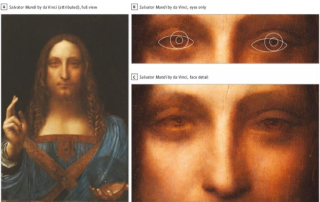 Da Vinci’s possible vision disorder may have influenced his art. An intermittent outward turn of the eye would have helped the artist with 3D to 2D perspective.  [Image: Christopher Tyler]

In a shocking move, Netflix cancels Marvel’s Iron Fist after two seasons. After a much-improved second season, the series was poised for a strong season 3.

Sweet Christmas: Another Defender bites the dust as Netflix cancels Luke Cage, just one week after pulling the plug on Iron Fist: Harlem’s hero is the latest casualty as Netflix does a little housecleaning, and I am super bummed about it.

Scientists Release Result from ‘Astonishing’ Feat of Creating and Testing Quantum Gas in Space.  Related: Exotic Matter Made in Space Could Boost the Hunt for Gravitational Waves. Off-world Bose-Einstein condensates might measure spacetime ripples better than any ground-based technique.

Funky Materials Give the Mantis Shrimp Its Powerful Punch. The legendary crustacean uses a hammer-like appendage made of ceramic and polymer to deliver its punishing blow.  Related: Mantis shrimps punch with the force of a bullet — and now we know how. it’s because of a structure called a saddle that stores energy and then releases it like an archer’s bow.

Why Dandelion Seeds Are So Good At Floating: “a team of physicists in Scotland have found that reason: a special kind of air bubble that forms above each seed, which helps keep it aloft longer. It’s literally a new kind of flying.”

The physics of why we don’t have solar-powered cars. “It’s all about energy density: how much energy falls on a surface relative to how much is consumed.”

What Makes Dead Space‘s Plasma Cutter Such A Great Weapon.

For the Last Time: Here’s the Difference Between Weight and Mass. (Narrator: “It’s probably not the last time.”)

New material could up efficiency of concentrated solar power. “The researchers involved in the new work, a large US-based collaboration, focus on a composite material: tungsten and zirconium carbide.”

A Space Mystery Tied Up in a Bow. CK Vupleculae was discovered by a French monk in 1670, and it’s been puzzling scientists ever since. “You’d think which exoplanet was found first would be obvious. But the history of that 1st discovery is a complete mess. It was *actually* Gamma Cephei Ab: discovered in 1988, retracted in 2002, then shown to be real again in 2003.”

Was Einstein Wrong? Tomorrow Begins A Seven-Year Quest To Mercury To Refine Spacetime.

Science in the Skies: the Atmospheric Tomography Mission, or ATom, aboard NASA’s DC-8 aircraft, took “measurements from around the world that could be used to understand how different chemicals form, interact, and transform in the atmosphere.”

This Is How Hubble Will Use Its Remaining Gyroscopes To Maneuver In Space.

The forgotten (female) quantum pioneer, Grete Hermann. “In a quantum universe, she argued, the notion of absolute truth must be abandoned in favour of a fragmented view – one in which the way we measure the world affects the slice of it that we can see.”

How Nuclear Testing Transformed the Land in Nevada and New Mexico.

Lucy Hawking exclusive: “My father was the gravity holding us in orbit.” On the publication of Stephen Hawking’s final book, his daughter Lucy Hawking reflects on their shared experiences and coming to terms with his death.  Related: Stephen Hawking Believed Time Travel Was More Likely Than The Existence Of God. As he explains in his final book, “Brief Answers to the Big Questions,” before the Big Bang there was nothing, not even a God to create the universe.

When Pop-Up Books Taught Popular Science. Before they were relegated to the domain of children, books with movable mechanisms explained anatomy, astronomy, and more to adults.  FYI CERN published a LHC pop-up book in 2013.

Want to move something at nearly the speed of light? Here’s how. In the first of a new series of videos, Ars Technica looks at the world’s biggest atom smasher.