A weird phase of water called ice-VII, a critical tipping point for the demise of Angkor, and when rock moves like a fluid are among this week’s physics highlights.

Greed Is Not Good: Study finds prior research claiming 1 in 5 CEOs are likely to be psychopaths was flawed. “We did not find a particularly high rate of psychopathy in CEOs or corporate leaders.” Also: there was a gender bias, in that acting like a psychopath is an advantage for male CEOs, not so much for women.

Smells Like PG-13: We might be able to rate future films with a sniff test, study says. We exhale more of a chemical called isoprene when watching scary movies. 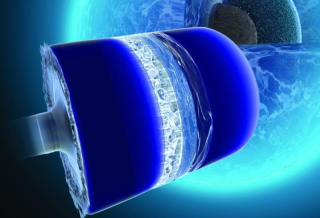 Particle physicists are turning to Lewis Carroll for help with their math. Marcel Golz at Humboldt University, Berlin has built on Charles Dodgson’s work to help simplify the complex equations that arise when physicists try to calculate what happens when particles interact.

Prepping for a Flood of Heavenly Bodies. Just as mathematics transformed physics from a philosophy into a science, data and computation are transforming science today, says Mario Jurić. He’s leading the push to get astronomy ready for the torrents of data that are about to flow. “We’re getting to a point where we’re measuring almost everything we can. The only way forward is to now do your data analysis correctly, because we cannot do approximations anymore.”

How Does The “Shape” Of An Electron Limit Particle Physics? The ACME experiment has released new result showing the “roundness” of the electron, which are touted as a test of fundamental physics theories.

Making Waves in a “Glass” Full of Atoms. Physicists have recreated a classic fluid-dynamics experiment by tapping on a trap filled with ultracold atoms.

Atoms may come apart as the Universe’s biggest stars explode. Something we found in a particle accelerator could explain massive stars’ supernovae.

What a Mouse Teaches Us About the Future of 3D Color X-Rays. The MARS scanner, armed with particle-detecting tech used in CERN’s Large Hadron Collider, lets us see so much more beyond the bone.

The Surprising Behavior of “Whirlpools” of Light. “Scientists from Delft University of Technology share the surprising things they found when, using a powerful microscope, they probed tiny structures in light waves confined to move in a two-dimensional world.”

The Trouble-Makers of Particle Physics: The Higgs boson “has followed all the rules [of the Standard Model], so far. Neutrinos, on the other hand, are trouble.”

Hirofumi Wada studies the mechanics of origami toys, elastic ribbons, french fry boxes—and just about anything else that he and his students encounter in their daily lives.

Scientists Create Artificial Wood That Is Water- and Fire-Resistant.

Pinning down the Chemistry of Photosynthetic Water Splitting. A time-resolved x-ray study indicates that certain chemical changes of oxygen atoms during photosynthesis occur in a different order than current models predict.

Are you a Boltzmann Brain? Why nothing in the Universe may be real.

It would take 100 pees to make the world’s first human-urine brick. “On Oct. 24, the world’s first “bio-brick” grown from human urine was unveiled by Suzanne Lambert, a master’s student in civil engineering at the University of Cape Town in South Africa.”

NASA brings a Hubble gyro back to life after a seven-year hibernation.

Science Isn’t About ‘the Truth’—It’s About Building Models. These are the three key things that any person should know about the nature of science.

“For a fixed-wing aircraft, stall – the point where airflow around the wing separates and lift is lost – is an enemy.”

Star Professor Lawrence Krauss Retires From Arizona State As Part Of Harassment Settlement. Related: Documents Show Arizona State Investigated Slew Of Allegations Against Physicist Lawrence Krauss. “It is inconceivable how a faculty member in the course of carrying out his work responsibilities could believe that the conduct would ever be appropriate.”

What everyone gets wrong about Newton’s apple. “Although the fabled “eureka” moment might seem to come all at once … Newton’s knowledge of force and motion gave him the key to unlock a new way of thinking.”

Wasp-inspired robots can lift 40 times their own weight—and work together to open doors.

Color Perception: Experiments In the Sciences and The Arts. “despite the multitudes of scientists who have studied color perception, from Newton to Edward Adelson, our knowledge of the science behind our color perception is lacking.”

How an 18th-Century Monk Invented the First Electronic Instrument, the “Denis d’or,” or “Golden Dionysus,” a “keyboard-based instrument outfitted with 790 iron strings that were positioned to be struck like a clavichord rather than plucked like a guitar.”

Australian exhibition explores the resonances between Indigenous art and images captured by microscopes.

Experts are no longer ignored—they’re attacked. “The Internet… has led people to think they can read the Wikipedia entry on epidemiology and tell someone with a Masters in Public Health why they don’t understand dangers of vaccines.”

The Incredible Technology Behind the Apollo 11 Lunar Mission That Took the First Astronauts to the Moon.