We’re back from our wanderings! And we have two weeks’ worth of tantalizing physics-y links for your reading pleasure. Among the highlights: reimagining Schroedinger’s cat might break quantum mechanics, scientists produced the strongest indoor magnetic field ever (and blew up the lab in the process), and possible evidence of a supersymmetric particle in Antarctica.

Study: people tend to cluster into four distinct personality “types.” Average, Reserved, Role Model, and Self-centered: not everyone falls into these four categories, but you might. And this new sorting algorithm yields more robust, replicable results than other methods.

Numbers Games: The math of why it’s so hard to build a spherical Death Star in space. Geometry puts some real design constraints on Darth Vader’s desire for a spherical Death Star. In his new book Math with Bad Drawings (based on his popular blog of the same name), Ben Orlin connects abstract math with reality. 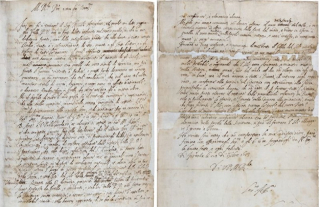 A new antenna using single atoms could usher in the age of atomic radio. The Rydberg Technologies team tested their device by recording themselves singing “Mary Had a Little Lamb”–a nod to Thomas Edison and his invention of the phonograph.

In Living Color: “Rainbow” weevil could hold the secret to generating nature’s colors in the lab. Similar mechanism might be used to make cosmetics and paints with more vivid hues.

The trailer for Captain Marvel is finally here, and it’s spectacular. Will Captain Marvel come to save the day after the devastating events of Infinity War? Maybe. But first, the origin story!

Matt Murdock is back and darker than ever in new trailer for Daredevil season 3. “Let the devil out”: the third season starts streaming on Netflix on October 19.

Watch Scientists Accidentally Blow Up Their Lab With The Strongest Indoor Magnetic Field Ever.

A Short History of the Missing Universe: Astronomers have known where the universe’s missing matter has been hiding for the past 20 years. So why did it take so long to find it?

Mathematicians Skeptical of Supposed Million-Dollar Proof. “There are six outstanding math problems that, if solved, will net you a $1 million reward. On Monday, a highly regarded mathematician claimed in a lecture that he has proven perhaps the most famous of these problems, called the Riemann hypothesis. But there’s reason to be skeptical.”

Noise in physics experiments is usually an unwanted annoyance, but Philip Ball investigates new research that’s attempting to put quantum noise to work.  This is a more technical, in-depth look at the “quantum Maxwell’s Demon” I wrote about a few weeks ago.

Is dark matter hiding in Antarctica? Neutrinos may decay invisibly, resolving problems in IceCube data.  Related: What is Dark Matter? Even the Best Theories Are Crumbling.

Japan Just Became the First Country to Deploy Rovers on an Asteroid.

Researchers discover the strongest material in the universe: the “nuclear pasta’ of neutron stars.

There’s a good chance that researchers could find out whether antimatter falls up or down by November.

When you bounce a tennis ball off a moving basketball, the tennis ball goes careening off at high speed. Here’s why that happens. 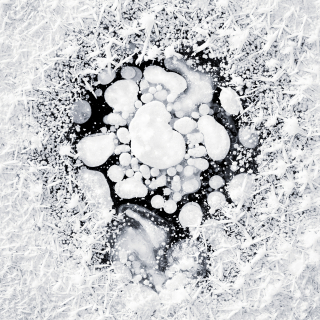 Japanese artist Ryota Kajita’s beautiful and otherworldly photographs of ice formation in Alaska. The images capture “otherworldly geometric patterns created by the bubbles that form as lake and river water freezes gradually from the surface down, trapping major greenhouse gasses like methane and carbon dioxide in the crystal lattice of ice.” [Image: Ryota Kajita]

Atiyah and the Fine Structure Constant: “Sir Michael Atiyah, one of the world’s greatest living mathematicians, has proposed a derivation of α, the fine-structure constant of quantum electrodynamics.” Sean Carroll has some thoughts on why he might be wrong.

Honeybee swarms act like superorganisms to stay together in high winds.

Bizarre Physics Phenomenon Suggests Objects Can Be Two Temperatures at Once.

As Above, So Below: Asteroid Motion on an Atomic Scale: “new research draws on the classical description of an asteroid orbiting the Earth to better understand a complicated quantum system.”

Mythbusters: The physics of the bullet drop experiment – one bullet fired horizontally and one dropped from the same height. What happens if there is air drag? Related; The Physics of a Star Wars Bomber Dropping Bombs in Space.

Predator Science: How Invisibility Cloaks Work: “it’s still fun to take a look at the creatures advanced technology and see how today’s gadgets match up.”

How do the best jumpers in the world soar so high? Wired‘s Robbie Gonzalez went toe-to-toe with world record holder Evan Ungar to find out.

Can You Survive a Fall From Space? “This thought experiment comes from the opening mission of the iconic first-person shooter Halo 3.”

What Are Chemtrails Made Of? Conspiracy theories notwithstanding, “the evidence pointed to the trails being simply the normally expected result of planes flying through the air.”

How Would Star Trek style Teleportation Change Society? It would make garbage disposal super easy, for one.

A controversial theory claims present, past, and future exist at the same time. “The block universe theory says that our universe may be looked at as a giant four-dimensional block of spacetime, containing all the things that ever happen.”

Life as an accelerator operator: Behind some of the world’s biggest scientific instruments are teams with a set of skills you can’t find anywhere else.

Why Mathematicians Can’t Find the Hay in a Haystack: In math, sometimes the most common things are the hardest to find. 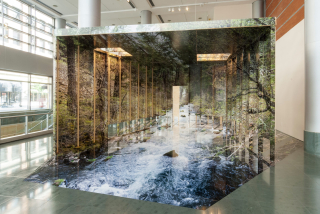 A New Three-Dimensional Installation by Chris Engman Invites the Viewer to Step Inside a Photograph. “The structure is a room, not an image of a room. The photograph is an object, in addition to being an illusion. It has weight, and volume, and changes as you walk around it.” [Image: “Containment” by Chris Engman]

In “Hydrophytes,” industrial designer Nicole Hone imagines a future in which we’ve designed aquatic plants to counter some of the effects of climate change.

Although you may not recognize the name, you’ve probably seen Kalliroscope, a pearlescent fluid that creates beautiful flow patterns when swirled.

Musical instrument goes flat in presence of adulterated medicine. Mbira’s tone change depends on whether tine is filled with good or bad medicine.

Invisible Swarms of Particles Envelop Us All. Scientists have demonstrated a promising technique for measuring and mapping your exposome—the flecks of animate and inanimate stuff that surround you at all times.

Polygraph tests don’t work as lie detectors and they never have. Americans love to take, deliver, and judge the results of polygraph tests. Too bad they’re mostly worthless.  See also my 2009 post on the topic.

“Many have tried to discern the disguised workings of Daedalus’s ‘perpetual motion’ machines, but only one person ever suggested the right answer to its creator. The secret is now kept in an envelope in the archive of the Royal Society.”

The Most Addictive Theorem in Applied Mathematics: Erika Camacho discusses how her favorite theorem applies to her research on mathematical modeling of eye diseases and the dynamics of fanaticism.

In 1900, a Photographer Had to Create an Enormous 1,400-Pound Camera to Take a Picture of an Entire Train.

Will L.A.’s Anti-Terrorist Subway Scanners Be Adopted Everywhere? Terahertz millimeter-wave technology will screen passengers for bombs and suicide vests from 10 meters distance as they rush to make the next train.

How Vehicle-to-Vehicle Communication Could Replace Traffic Lights and Shorten Commutes. A Carnegie Mellon startup aims to manage traffic at intersections by harnessing the radios in tomorrow’s cars.

Nuclear startup Transatomic Power to fold after failing to deliver reactor that ran on spent fuel.

How not to be fooled in physics: Particle physicists and astrophysicists employ a variety of tools to avoid erroneous results.

See Science Fair even if you’ve never entered one in your life: Tracking kids as they gear up and go to Intel’s International Science Fair.