A Breakthrough Prize for Jocelyn Bell Burnell, when solid cargo (granular media) mysteriously liquefies, and the physics of perfect pork butt were among this week’s physics highlights.

Jocelyn Bell Burnell wins $3 million prize for discovering pulsars. The astronomer was famously excluded from the 1974 Nobel Prize in Physics.

The secret to successful BBQ pork butt and brisket is science: How to beat the infamous “stall” and other tricks of experienced pit masters

There’s now an even more precise “recipe” for blowing the perfect bubble. Understanding these dynamics could improve processing of many consumer products.

The slow-burn psychological horror of Castle Rock makes for must-see TV. I had a chat with co-creator Sam Shaw–who also created the wonderful series Manh(a)ttan–on that shocking twist and what’s to come as the finale looms.

Mystery of the cargo ships that sink when their cargo suddenly liquefies. “Solid bulk cargoes – defined as granular materials loaded directly into a ship’s hold – can suddenly turn from a solid state into a liquid state, a process known as liquefaction. And this can be disastrous for any ship carrying them – and their crew.”

Neutron-star merger blasted a jet of material through the debris. We can trace the progress of the jets as they shoot out from the merger.

Artificial intelligence nails predictions of earthquake aftershocks. A neural-network analysis outperforms the method scientists typically use to work out where these tremors will strike.

NASA says it’s building a gateway to the Moon—critics say it’s just a gate. “It is the next giant leap into quicksand.”

Fall Is Here! Time to Learn the Physics of… Falling. Stuff is constantly falling—off tables, out of bags, from the sky. Let’s explore the science of all things tumbling downward.

Antimatter, Dark Matter and Helium: A new measurement at CERN tells us something about the way particles travel through interstellar space. Which in turn may help a satellite on the International Space Station find evidence for Dark Matter. 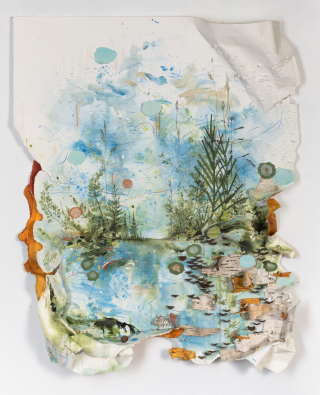 Mixed Media Works Expose the Destructive Materials Used to Replicate Landscapes: “The textured paintings and assemblages of artist Gregory Euclide combine organic and man-made materials to present the rapid changes happening to the landscapes around us.” [Image: Gregory Euclide/Hashimoto Contemporary]

Humans can perform ghost imaging, no computer required. Researchers show that the eye combines images like a slow-exposure camera.

Hawk Moths Hold Steady When Faced with Turbulence. Scientists use high-speed video and mini-cannons made of plastic toy parts to understand how hawk moths respond to disturbances mid-air.

Get ready for atomic radio: Using a laser to detect the effect of radio waves on certain atoms is the basis for a new kind of antenna that resists interference and can receive a wider range of signals.

“At high, dry altitudes, fields of snow transform into rows of narrow, blade-like formations as tall as 2 meters, known as penitentes.”  Also see my 2015 post at Gizmodo on solving the icy mystery of these nifty structures,  as well as my older (and longer) 2007 post on penitentes and similar formations like Giant’s Causeway.

What Does Quantum Theory Actually Tell Us about Reality? Nearly than a century after its founding, physicists and philosophers still don’t know—but they’re working on it.

The Science of the Tennis Grunt: A burgeoning field of study analyzes the effects of players’ grunts, from Sharapova’s shriek to Rafael Nadal’s chainsaw wail.

Being reminded of your political bubble can stop you from breaking out. Hearing other views works better when you forget you’re supposed to be fighting.

Just because I am a mega Buffy fan: Let’s Pair Members of the Trump Administration with Their Buffy the Vampire Slayer Counterparts. “Trump is … like that giant snake beast at the high school graduation: big, dumb, destructive, and willing to eat his own people if they get in his way. ”

Scientists Say The Idea Of A Microwave Attack Against US Diplomats Makes No Sense. Powerful microwave radiation is the latest crazy theory to explain the US diplomats’ illnesses. Many scientists aren’t buying it. Related: Cuba’s “Sonic Attack” on the U.S. Embassy Could Have Been Merely Sounds Emitted By a Listening Device. A UPenn bioengineer disputes a recent New York Times report suggesting that microwaves accounted for what occurred at the U.S. embassy in Havana

The Numbers Behind a Fields Medalist’s Math: Inside the p-adic numbers that make Peter Scholze’s work tick.

What Bored These Tunnels Inside Thai Garnets? Nothing quite like the branching, fusing and synchronously turning tunnels has ever been seen before.

A Supernova Secret May Be Hidden Inside Meteorites.

The Enduring Myth of Phantom Cosmonauts: “like any enduring myth, there is a kernel of truth in this story.”

Make space great again: Why the International Space Station still matters. As one of the biggest manmade structures in the sky and at a cost of over $100b, it’s the place where the space age dream is still alive.

The Meissner Effect: How to levitate a neodymium magnet.

The Mathematical Complexity of Dodecaphony Within La Monte Young’s Opus ‘The Well Tuned Piano. “This piece, aside from being almost five hours long, employs dodecaphony, a twelve-tone (yup) technique that has a certain mathematical complexity that forgoes traditional scales for a truly unique sound.”