Indiana Jones might be a swashbuckling, thrill-seeking archaeologist who once loftily claimed "I'm a scientist. Nothing shocks me." But there's one thing famously guaranteed to freak him out: snakes. Yes, Indiana Jones is an ophidiophobe (ophidiaphobia = fear of snakes). This was established in the opening frames of Raiders of the Lost Ark, when he meets his pilot's pet, "Reggie," and used to comic effect later on, when he and his loyal guide finally locate the Ark's secret hiding place, only to look down into the dark and see the floor, well, moving. "Snakes. Why did it have to be snakes?" Indy moans. His friend isn't exactly helpful: "Asps. Very dangerous. You go first."

So just imagine how Indy would react to Chrysopelea paradisi, a tree-dwelling snake commonly found in Southeast and South Asia, with a penchant for flinging itself off its lofty perch in the trees, flattening its body, and gliding to the ground, or another tree — or YOUR HEAD! That's right: these snakes can fly, and not because they've invaded a passenger jet with the aim of freaking out Samuel L. Jackson. (We are all fed up with those snakes on a mother-f%$#-in' plane, amiright?) They use this ability to get to a new location faster, to hunt for prey (!), and sometimes as a defense mechanism. File under the "Damn, Nature, You Freaky" category. This one will give Indy and his fellow ophidiophobes a few nightmares.

But this genus of flying snake fascinates scientists like Jake Socha, currently a biologist (biophysicist?) at Virginia Tech. He's been studying these creatures for 13 years now, and finds the biomechanics of their unusual ability quite complex. He published his initial findings in Nature back in 2002, when he was at the University of Chicago, outlining the basic aerodynamics. Prior to launch, the snake pushes its ridge scales against the rough surface of a tree trunk to make its way up to the branch of choice. Then it hangs off the end, and the angle of its inclination plays a role in determining its flight path. Then it contracts its body into an upward thrusting motion to launch itself into the air, and uses its body to create a kind of "pseudo-wing" for maximum gliding distance.

Specifically, the snake sucks in its stomach and can use its ribs to flatten out its body shape to create a "Frisbee" effect: a Frisbee is designed with a cross-sectional "concavity" (i.e., its shape curves inward on the bottom), and this increases air pressure under the Frisbee, providing lift. The flattened body of the flying snake has a similar concavity. While a Frisbee spins to increase air pressure, the animal undulates mid-air to create the same effect, in an S-shaped motion akin to swimming or snapping a whip. (That's a photo of Chrysopelea pelias mid-flight below; you can watch videos of all Socha's flying snakes here). 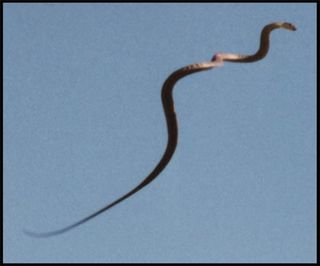 While it might be visually arresting, it turns out that those undulations aren't as important as one might think when it comes to optimal performance in flight. For a later study, published in 2005, Socha looked closely at such variables as glide angle and horizontal speed, and correlated those with snake size and behavior variables, including mass, body length, and wave amplitude and frequency (the "wave" refers to the undulations of the snake's body while in flight). He found that wave frequency really wasn't an important predictor of flight behavior.

What factors did matter? Well, size matters — except in this case, smaller is definitely better. Body length, mass and wave amplitude were predictors, and Socha found that smaller snakes can glide much further horizontally than larger ones. The undulation seems to serve the purpose of stabilizing the snake mid-flight.

Most recently, Socha decided to study Chrysopelea paradisi as they leapt off a "branch" attached to a 15-meter-tall tower, with four cameras recording the snakes' movement as they glided. Based on that footage, his team was able to create 3D models of the snakes' body positions mid-flight, coupled with an analysis of the various forces acting on their serpentine bodies and basic gliding dynamics.

What did they learn this time around? Well, for starters, the snakes can travel as far as 24 meters from their launch pad, although they never quite achieve what Socha describes as an "equilibrium gliding state." This is defined as a perfect balance of forces: that generated by the contortions of the snakes' bodies to give them a bit of "lift," and the force of gravity pulling them down. If the balance were perfect, the snakes would glide with constant velocity and at a constant angle.

But they are gliding: they certainly don't just fall to the ground and go plop."The snake is pushed upward — even though it is moving downward — because the upward component of the aerodynamic force is greater than the snake's weight," Socha explained. In fact, if this effect continued indefinitely, at some point the smake would start to rise, but as always, gravity wins in the end. There's only so far the snake can glide before hitting the ground. That, at least, should provide some comfort to Indiana Jones.