It's Christmas-time, and guest blogger Danna Staaf is back with a nifty explanation of why Stephanie Meyers' emo-vampires in the Twilight series sparkle. Makes sense to Jen-Luc Piquant!

"Gran didn't know that I was in love with a
vampire–nobody knew that–so how was I supposed to explain the fact that the
brilliant sunbeams were shattering off his skin into a thousand rainbow shards
like he was made of crystal or diamond?"

Sparkling vampire skin both introduces the novel New Moon and
serves as a central plot point, when Edward tries to reveal himself in bright
sunlight in a crowded Italian plaza. Leaving aside the question of why Edward
decided on this drastic course of action, which in my opinion has to do with
the unhealthy view of high school relationships that comes from taking Romeo
and Juliet too seriously . . .Let's finally tackle the scientific question: Why do vampires sparkle?

"Why" questions can be answered with either proximate
or ultimate causes, even a simple "why" like "Why are you on
that motorcycle?" "Because I picked it up and climbed on" is the
proximate — also known as the smart-aleck — cause. "Because I'm mentally
unstable and looking for an adrenaline rush," is the rarely-confessed
ultimate cause.

In that case, Charlie Swan would probably be more interested
in his daughter's ultimate causes, but for scientific questions, both answers
are well worth exploring. For example: why are peacock tails so spectacularly
colored? The proximate cause is a mechanistic explanation:
because each feather bears rows of tiny barbs, and each barb bears even tinier
barbules, and still tinier structures on the surface of the barbules reflect
certain wavelengths of light to produce brilliant iridescence. The ultimate
cause is an evolutionary explanation (not uncontested):
because peahens prefer to mate with healthy peacocks, and tail ornamentation is
one proxy for health, so over many many generations sexual selection resulted
in peacocks with fancier and fancier tails. 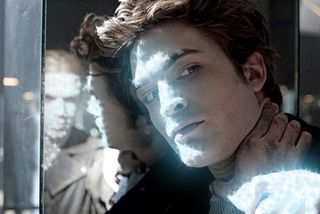 This is all relevant to sparkly vampires, I promise! You
see, the most obvious proximate explanation for the brilliant sunbeams
shattering off his skin into a thousand rainbow shards is, of course, overwrought
writing iridescence. This shiny phenomenon is found throughout the natural
world, not just in peacock tails, but beetle backs, lizard bellies, and (you
knew I had to mention a cephalopod) squid skin, to name only a few.

Iridescent colors are structural colors, produced not
chemically, but mechanically. (Aha, a justification for putting this blatantly
biological post in a physics blog!) Usually, when we think of colors, we think
of chemical colors, or pigments–the melanin in our hair, for example, or the
ultramarine blue
in paint. The color of a pigment is determined by selective absorption. When a
full spectrum of white light hits the pigment, it absorbs some of that spectrum,
and reflects the rest. The reflected part is what hits our eyes, and we name
the pigment accordingly. Chlorophyll, that great workhorse of photosynthesis,
absorbs everything except green wavelengths, which is why plants look green.

Structural colors work very differently, based on the fact
that visible colors have an actual size, at a nanometer scale–blue light
vibrates at 475 nanometers and red light at 650. At this tiny scale, an object
can interfere with white light, separating it into its component colors and
scattering them in different directions. All kinds of nanostructures can cause
interference effects–nanogrooves, nanolayers, nanopits–and different animals
use different structures. To return to our friends the peacocks for an example:
the barbules on their feather barbs contain lattices of tiny rods, each rod
about 700 nanometers long. Different barbules produce different iridescent
colors by variable spacing between the rods, and variable numbers of layers of
lattices.

In peacocks as in most other iridescent animals, these
structural features are fixed. Blue barbules are always blue, and red barbules
are always red. But some fish and squid can actively change their structural
colors by altering the nano-structure of their skin with electrical signals!
The maiden episode of Creaturecast does a beautiful job explaining this
remarkable phenomenon and I've rambled
away over at Cephalopodiatrist about how intrepid entrepreneurs are already
looking for ways to turn biology into technology.
However, there has been no indication yet of vampires with a similar ability.

Iridescence seems like a satisfactory explanation for
vampire sparkle, but it's necessary to consider alternative theories. For
example, a deep-sea biologist friend of mine suggested that vampire skin may
contain symbiotic bioluminescent bacteria. (Abundant precedents for such symbioses can be found in
the animal kingdom.) He further hypothesized that the bacteria are
chemosynthetic, which means that instead of making food from light (that's what
green plants are doing with all that chlorophyll) they make their food from
chemicals. In this case, probably pheromones and angst molecules.

It would be quite straightforward to distinguish between
these two possibilities with a simple laboratory analysis of vampire skin.
Light microscopy should be sufficient for detecting the presence of symbionts,
and electron microscopy would be helpful for visualizing fine nanoscale
structures if it does turn out to be iridescence after all.

At this point, I figured it was time to do a little research
to see if anyone else has started experimental work on the subject.
Surprisingly, they haven't.

Almost as surprisingly, I found that Stephenie Meyer herself
offered a semi-scientific explanation of sparkling in her website FAQ. It's under the question
"Vampires and pregnancy: when did that idea occur to you? How does that
work?" about two-thirds of the way down the page.

Accordingly to Stephenie, "the cells that make up
[vampire] skin are not pliant like our cells, they are hard and reflective like
crystal. A fluid similar to the venom in their mouths works as a lubricant
between the cells, which makes movement possible (note: this fluid is very
flammable)."

For those who haven't been following along, yup, vampires
are venomous. Not poisonous — an important distinction I'm glad she got right. Cell lubricant, strange as it sounds, is another thing
she got right, although it's hardly unique to vampires. In fact, all
multicellular animals, including humans, have cell lubricant– it's called
interstitial fluid. Wikipedia
tells us that "On average, a person has about 11 liters of interstitial
fluid, providing the cells of the body with nutrients and a means of waste
removal." To put this in context, the average adult human contains only
about 5 liters of blood. Said another way: your body has more than twice as
much cell lube as blood!

Back to the point, which is sparkle. According to Stephenie,
vampire sparkle is neither iridescence born of nanoscale structure nor the
luminescent glow of a compliant symbiont. It's a large-scale property of skin
cells themselves. Maybe this whole post was unnecessarily complicated. Maybe
vampires are just made of little diamonds squooshing around in a matrix of
venom.

To which I say: ewww, but if that still sounds sexy, try
looking at it this way:

Hey, speaking of sex, next time I'll discuss ultimate causes
of vampire sparkle and delve into an evolutionary exploration of the
vampire/human relationship!