In the pantheon of the greatest sci-fi movies of all time, Demolition Man isn't likely to rate very highly. But I enjoyed the rampant silliness of a future Los Angeles where a totalitarian peace-loving society has traded in everything that could possibly be bad for you for a "happy joy-joy" kind of existence guaranteed to grate like fingernails on chalk  — not to mention a relentlessly perky Sandra Bullock in one of her earliest major roles, and Dennis Leary as an underground revolutionary giving a classic rant on why he wants to smoke, drink, watch pornography, and eat artery-hardening bacon cheeseburgers and french fries if he damn well feels like it, okay?

The premise is pretty simple: Wesley Snipes plays a psychotic criminal named Simon Phoenix, who is apprehended by Sylvester Stallone's John Spartan, a rogue cop known as the "Demolition Man" because of the rampant property destruction he leaves in his path. (Best line: he's marching from another epic disaster, all done in the line of duty to save an 8-year-old girl, and a reporter asks whether one little girl was really worth all the damage he'd incurred. The little girl glares at her and says, "Fuck you, lady!" As well she should….) Unfortunately, while Phoenix gets put into long-term Cryo-prison, so does Spartan — a number of civilians were supposedly killed this time when the inevitable explosion occurred. Fast forward to 2032 or so, and Phoenix is un-thawed for his parole hearing… and escapes. The peace-loving society can't cope with his violence, so they un-thaw Spartan, too, and futuristic wackiness ensues.

I just happened to catch a cable re-run of Demolition Man recently while traveling with the Time Lord (he fell asleep before it was over; just didn't capture his interest). And then I stumbled upon an intriguing post over at io9 about "biological antifreeze": proteins used by the food industry in products such as low-fat ice creams and frozen yogurts, where water replaces the traditional fat. Mixing in antifreeze proteins with the ice cream keep these foods from turning into large blocks of ice. I decided now might be a good time to talk about the challenges of cryogenics when it comes to freezing and unfreezing a human being (or any other warm-blooded creature). Here's how Mother Nature tackles the problem:

Fish, insects, and bacteria in cold climates have antifreeze proteins (AFPs) in their bodies which keep their fluids from turning to ice. The AFPs in a living organism have to solve a tricky problem. Although they must bind to ice crystals immediately, before the ice spread and freezes the area around it, AFPs cannot bind to liquid water. If they do, they'll dry the organism from the inside out. Ice and water are made from the same recipe – they're both two hydrogen atoms and an oxygen atom – so the proteins have to distinguish water from ice using something other than their atomic makeup.

Studies done of the AFPs of arctic fish found that antifreeze proteins masquerade as ice in order to trap it. Although AFPs don't bind to water in the animal, they do make use of it. AFPs are made up of hydrophilic amino acids, which hold on to water, and hydrophobic ones which repel water. Their hydrophilic sites grab onto water molecules and form them into a cage. Six rings, each made up of several water molecules, are linked together by the hydrophilic parts of the AFP. The gaps between the water molecules fill with the hydrophobic parts of the AFP. These repel water molecules, but will hold on to ice. So the AFPs patrol the body of arctic animals, caging up any tiny ice crystals before they do any damage, while leaving liquid water alone.

Scientists have been taking note of Nature's ingenuity. In late June 2005, tabloid headlines in England and Australia screamed about the creation of "zombie dogs" by a group of Pittsburgh scientists. (It’s probably just coincidence that the classic zombie horror film Night of the Living Dead was filmed in the city’s Monroeville Mall.) As with most tabloid stories, the moniker was an over-hyped misnomer, but the results described were surprisingly accurate. Scientists have made substantial progress in achieving something called suspended animation with delayed resuscitation. Suspended animation is an outgrowth of the field of cryogenics and its cousin, cryonics: the storage of human bodies at extremely low temperatures in hopes of one day reviving them. It’s similar to how people who fall into icy water can survive for up to an hour despite the cold temperatures because their body goes into suspended animation: the metabolism and brain function slow down to the point where little to no oxygen is needed.

Researchers at Pittsburgh’s Safar Center for Resuscitation Research have developed a new technique for suspended animation that could help save lives of accident victims or soldiers on the battlefield – or anyone who has suffered a lethal hemorrhage. (Roughly 50,000 Americans die every year from hemorrhage, which is also the leading cause of death among troops killed in action.) They tested their technique on dogs. First, they drained the animals’ blood and replaced it with an ice-cold salt solution, mixed with small amounts of glucose and dissolved oxygen — a kind of antifreeze. The dogs were clinically dead, with no heartbeat, respiratory functions, or brain activity, but their tissues and organs were perfectly preserved because the procedure lowers the body temperature to about 50 degrees F. After three hours, fresh warm blood was pumped in and the animals were revived with electric shocks. Two-thirds of the “zombie dogs” in the study suffered no brain damage from the procedure.

In reality, three hours is the upper limit for how long a body can remain in suspended animation and still return to normal function. That’s usually long enough to transport trauma victims to a hospital, and enable surgeons to locate and repair internal bleeding. The trick is, how are you going to keep the cells of living tissue from shattering once they’ve been frozen? This is one of the biggest challenges facing the field, and a big part of why, to date, no one in long-term cryonic suspension has been successfully revived.

That’s because of the physical changes that take place when something freezes. It’s a well-established scientific fact that the same substance will behave differently at various temperatures and pressures.  Water (H2O) is the most familiar example. It can be a solid (ice), a liquid (water), or a gas (steam), but it is still made up of molecules of H2O, so its chemical composition remains unchanged. At sea level, water freezes at 32 degrees F (0 degrees C) and boils at 212 degrees F (100 degrees C), but this behavior changes at different altitudes because the atmospheric pressure changes. In fact, get the pressure low enough and water will boil at room temperature. The critical temperature/pressure point at which H2O changes from one form to another is called a phase transition. 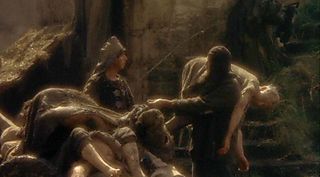 Cells contain a lot of water. Water expands when it freezes into a crystalline solid, and this expansion causes the cell walls to burst or shatter. So in order to cryogenically freeze a body with any hope of resuscitation, one must first remove all the water from the cells and replace it with the equivalent of human antifreeze, like the Pittsburgh researchers did with their canine subjects. This keeps the organ and tissue cells from forming ice crystals at extremely low temperatures and puts the body into suspended animation, so that it can then be cooled down to freezing levels gradually. That’s not the only difficulty. The warming up process must be done gradually at very precise speeds – again, to prevent cells from shattering.

Which brings us to Mark Roth, a University of Washington researcher whose work has made the pages not just of Science magazine, but also Ripley's Believe It or Not!, not to mention a nice profile in Esquire. Roth's specialty these days is developing techniques to achieve short-term suspended animation — just long enough to to transport trauma patients on their way to the hospital, or to stabilize a patient during surgery. Roth has a personal stake in the issue: he lost his one-year-old daughter, born with Down Syndrome, during a surgical procedure that got complicated; his daughter bled out and died on the operating table. He became obsessed with suspended animation. And that obsession eventually led him to a NOVA special on caves in Mexico filled with hydrogen sulfide, ten times more toxic than carbon monoxide. Those caves should be devoid of life; instead, they are teeming with fascinating creatures.

So, how does Roth do it? He replaces the oxygen one would normally breathe with the highly toxic hydrogen sulfide. It's the kind of stuff that should kill a human being outright but here's the thing: apply hydrogen sulfide in a very cold environment and it alters mammalian metabolism to the point where Roth can place lab animals into suspending animation and bring them back again hours later — just like Pittsburgh's "zombie dogs." Apparently in such a suspended state, the body can better cope with oxygen deprivation resulting from shock, massive blood loss and the like. It's the kind of thing that could save soldiers on the battlefield, civilian trauma victims — and might have saved Roth's baby daughter. He's founded a biotech company called Ikaria to further develop and market the technique. Wanna know more? I'll let Roth tell you all about it:

2 thoughts on “bring back your dead”